We stopped by for a late lunch on our way through Vancouver and really enjoyed ourselves. The food was well prepared, the beer selection good and the staff was great. Great little find.

“Tip of the hat to the Tipper Restaurant”

See yourself as an artsy, or musical person and want to eat at the same time?
Then The Tipper is the place for you. Located in an less than iconic venue on Kingsway, The Tipper has that artistic, rustic vibe, with art on the wall, and great music at night. There is a second floor at the back of the restaurant if you are coming in with a large party during the day. And the food-a creative take on an all day breakfast, with eggs benedict and other long time favourites reinterpreted with a modern, creative vibe.

The coffee is great, you can bring your kids, and you can eat with great service, great prices, and a bit of local art and music.

A lovely laid back restaurant with great ribs and steak, good service, reasonable prices and a good atmosphere.

My husband and I went to the Tipper on a Sunday evening for the live music in their back room. We had dinner first in the dining room and were happily surprised by a terrific meal, followed by wonderful dessert.I can highly recommend the Truffilicious Cake!

The Tipper Restaurant on Kingsway, Vancouver Many people would associate the Kingsway stretch in East Vancouver with Vietnamese restaurants. It was, after all, where we had Dot Com Pho: Free Comic Book Edition. That said, there are all kinds of great places to eat in that neighborhood. It was after Dot Com Pho that we discovered The Tipper and I made a mental note to give them a visit.

So, that’s where I decided to have lunch one day. The Tipper, which is also known as Bottle Tipper, definitely has the feel of a pub or a bar, but they are open for breakfast and lunch too. Taking a look at the menu, you’ll find that nearly everything is in the $8 to $15 range, making for a very reasonably priced meal. From what I recall, breakfast is served until about 5pm too. Most of the fare is basic and simple, including burgers, pastas, and hot wings.

It was really quiet on a weekday afternoon, but I did notice that The Tipper was reasonably busy when we walked by on Saturday. I imagine a good part of their business comes in the evenings. I ordered the beef dip sandwich ($9.89). The thinly shaved roast beef was served with Swiss cheese on a toasted garlic Portuguese bun, along with hand cut fries and fresh made au jus. While I’m more accustomed to having a beef dip on a longer bun rather than a round bun, the au jus had a great flavor, as did the garlic on the bun. The fresh fries could have been crisper, but they were still very good.

This is an entirely different sandwich than what you’d get at a place like Chez Meme Baguette Bistro, but you can see that the same level of care and attention is given at The Tipper. Susanne ordered the wild salmon burger ($14.89), which includes a six-ounce filet of fresh wild BC salmon, Cajun seasoning, garlic basil butter, a generous slice of real cheddar cheese, spring mix greens, tomato, and red onion. The mild cheddar was a nice complement to the medium moist fish. The Cajun seasoning wasn’t very pronounced, which allowed the salmon to shine more on its own. Instead of the fries, Susanne got the seafood chowder, which was creamy and hearty.

Restaurants like The Tipper prove that you don’t have to be fancy to be delicious. The menu items aren’t terribly innovative, but the ingredients are very fresh and everything is presented with attention to detail. Service was understandably attentive; we were only one of two tables at the time. The availability of free Wi-Fi is an added bonus.

Considering that you’d pay around $6-9 for an “extra value” meal across the street at the golden arches, you’re much better off by paying a couple dollars more to get a fresh, well-crafted meal at The Tipper instead. 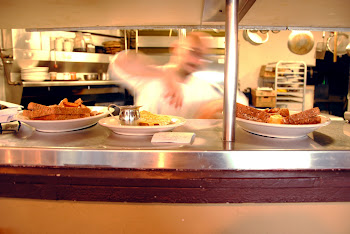